Latest News: What are your most underappreciated works?

Hemma bäst—or, English versus native language: Illustrating with Sweden and economics, Eva Forslund and Magnus Henrekson question the English-language pull where English is not the native language. Commentary essays are provided by Lars Engwall and by Alberto Mingardi.

Cooked: Higher temperatures decrease the rate of economic growth in the United States, according to Riccardo Colacito, Bridget Hoffmann, and Toan Phan. David Barker criticizes their JMCB article on two counts, makes the improvements, dissolves the results, and uses alternate data yielding a sign reversal though also not statistically significant.

Film incentive programs revisited: Picking up on an earlier exchange (Bradbury’s critique, O’Brien and Lane’s reply), Bruce Bird, Hilde Patron, and William Smith bring scrutiny to the reply, new data to bear, and renewed doubts about the original paper, which was published in Regional Studies.

Not being tread upon: Ryan Murphy rejoins to Jan Ott on the understanding of freedom in the Fraser economic freedom index, and Ott supplies a second reply.

Adam Smith’s View of Man: “Smith would not have thought it sensible to treat man as a rational utility-maximiser.” The University of Chicago professor Ronald Coase’s Journal of Law and Economics essay from 1976, republished here by permission, focuses especially on Smith’s Moral Sentiments.

Scattered Hints Concerning Philosophy and Learning: In this little-known essay from the 1750s, Edmund Burke warns against “confined” learning: “The End of learning is not knowledge but virtue; as the End of all speculation should be practice of one sort or another.”

Eva Forslund and Magnus Henrekson on English vs. the Native Language

What are your most underappreciated works? 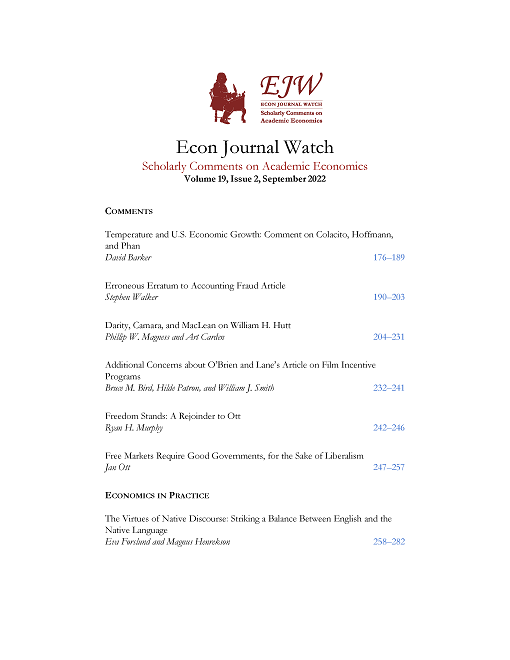 Econ Journal Watch resists the contamination of scholarship by political bias. It is even more important, in my view, as a forum for dissecting how unnecessarily pretentious display of method and technique often crowds out attention to how the real world works.