Let facts be submitted to a candid world: Ron Michener explains the role of monetary affairs in the hardships that helped to justify the rebellion of the American colonies, and criticizes Farley Grubb’s Journal of Economic History article on the money of colonial New Jersey. (Professor Grubb received Professor Michener’s comment too late to allow for concurrent reply but will reply in the next issue of this journal.)

The economics of economics: Using 291 person-year observations from UCSD Econ, Yifei Lyu and Alexis Akira Toda model Econ faculty compensation on publications and citations and find, among other things, no evidence of a gender gap.

The Liberal Tradition in South Africa, 1910–2019: Martin van Staden describes the unique history and current standing of classical liberalism in South Africa, including an extensive account of liberals in the nation’s politics. The article extends the Classical Liberalism in Econ, by Country series to 19 articles.

Lawrence Summers Deserves a Nobel Prize for Reviving the Theory of Secular Stagnation: Julius Probst makes the case, inaugurating the series on Who Should Get the Nobel Prize in Economics, and Why?

Mizuta’s 1967 checklist of Adam Smith’s library: We reproduce by permission the 1967 checklist created by Hiroshi Mizuta of the titles that were owned by Adam Smith. This checklist (supplemented by a list of additional once-elusive titles) provides a handy means for determining whether a title was in Smith’s personal library.

Ron Michener on Why It’s Important to Get Colonial U.S. Monetary History Right

Patrick Mardini on the Political Economy of Lebanon 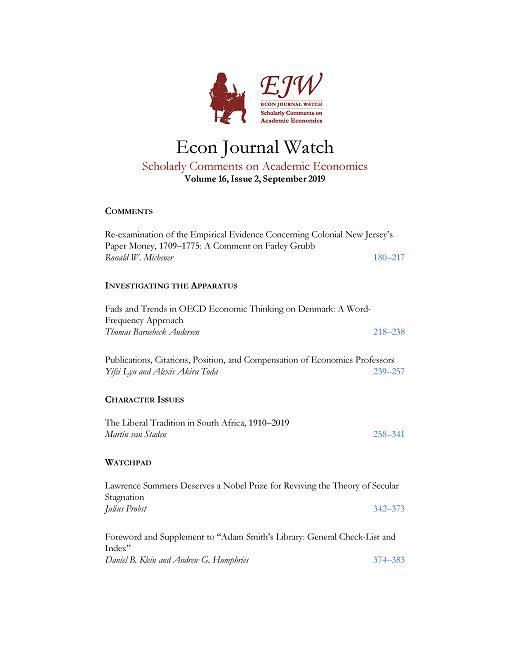