Knowing when we know a null: In an AER article, Michael Clemens, Ethan Lewis, and Hannah Postel study a natural policy experiment, the 1964 abrogation of the agricultural labor (bracero) agreements between the United States and Mexico, and conclude that the exclusion of roughly half a million seasonally-employed Mexican farm workers does not enable the rejection of a null effect on domestic farm workers’ wages and employment. Robert Kaestner questions whether nature has allowed herself to be thusly revealed. Clemens, Lewis, and Postel respond, suggesting that nature has not here remained so unknowable.

Do Film Incentive Programs Promote Economic Activity? J. C. Bradbury treats an empirical study by Nina O’Brien and Christianne Lane about state film incentive programs in the U.S., raising questions about the data and the meaning of the results. O’Brien and Lane respond.

Spiky exchange: Farley Grubb replies to Ronald Michener on the money of colonial New Jersey, explaining how he uncovered records of volatility in exchange rates.

Science on FDA Liberalization: Bartley Madden’s Free To Choose Medicine recommends liberalizing the permitting of new drugs, and appears to have influenced reforms abroad, focused on regenerative medicines (e.g., stem cells). An article in Science deprecates Madden’s book and such liberalization. Madden responds to the article.

Government-Cheerleading Bias in Money and Banking Textbooks: Nicholas Curott, Tyler Watts, and Benjamin Thrasher systematically review six leading textbooks, examining the inherent stability of banks, the historical origins of central banks, fragility during the National Banking Era and the origins of the Federal Reserve System, bank panics during the Great Depression, deposit insurance, the Great Recession of 2008–2009, and the U.S. economic performance before and after the Federal Reserve Act. Copiously citing scholarly literatures, the lengthy investigation finds quite consistent government-cheerleading bias.

Why Edward Leamer deserves a Nobel prize: Arnold Kling lauds the sage who took the con out of econometrics. The article continues the series on Who Should Get the Nobel Prize in Economics, and Why?

Witness: Five articles by Eric A. Stewart and coauthors have been retracted from Social Problems, Criminology, and Law & Society Review. Here, Justin Pickett—a coauthor of one of the articles and a former student of Professor Stewart—provides a quantitative and qualitative account of the retractions.

Carrying pictures of Chairman Mao: Evan Osborne reveals Joan Robinson’s little-repented Maoism, which has been too-little noted by scholars who write on Robinson.

Bentham v. Blackstone: Gertrude Himmelfarb criticizes Jeremy Bentham’s critique of William Blackstone. “What Blackstone and the Founding Fathers had in common, and what Bentham notably lacked, was a large tolerance for complexity.” Republished by permission.

Nicholas Curott on Bias in Money and Banking Textbooks

Young Back Choi on Liberalism in Korea 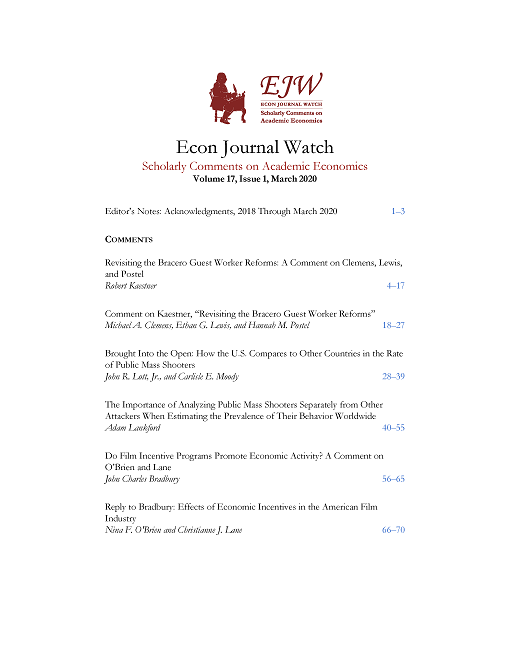