Compared to what? Stephen Walker looks at an award-winning Review of Accounting Studies article that develops a measure, based on Benford’s law, to identify errors in financial statements, and shows that it does not measure up to simple and sensible alternatives.

What’s free about free markets? Jan Ott argues that the Fraser economic freedom index ought not to include government size as a factor in the measurement. Ryan Murphy explains that the meaning of freedom used in the project is based on a conceptualization of freedom that is central to liberal civilization. Professor Ott replies.

A deep dive into deep roots: Does the ‘deep’ ancestry of a population correlate with aggregate outcomes in modern times? Jason Briggeman looks carefully at the data and methods of two ‘deep roots’ articles coauthored by Louis Putterman and disputes the claim that they teach us something.

From Hume to Smith on the Common Law and English Liberty: Jacob Hall argues that Paul Sagar does less than justice to David Hume.

Uncovering errors on measuring the underground economy: Manuel A. Gómez and Adrián Ríos-Blanco uncover problems in the Journal of Macroeconomics article “Measuring the Size of the Shadow Economy Using a Dynamic General Equilibrium Model with Trends”, by Mario Solis-Garcia and Yingtong Xie, who thank them for pointing them out, and who offer a revised procedure said to meet the goals of the original paper.

Liberalism in Colombia across the centuries is documented by Sebastián Rodríguez and Gilberto Ramírez. The article extends the Classical Liberalism in Econ, by Country series to 22 articles. “Liberalism nevertheless continues to pulsate in Colombia. Its future is unwritten.”

The inconsistency of “market failure”: Do you want the government to regulate markets with externalities, monopoly power, knowledge asymmetries, and products with false allure? Here is Ronald Coase’s 1974 essay “The Market for Goods and the Market for Ideas.”

Sebastián Rodríguez on Liberalism in Colombia 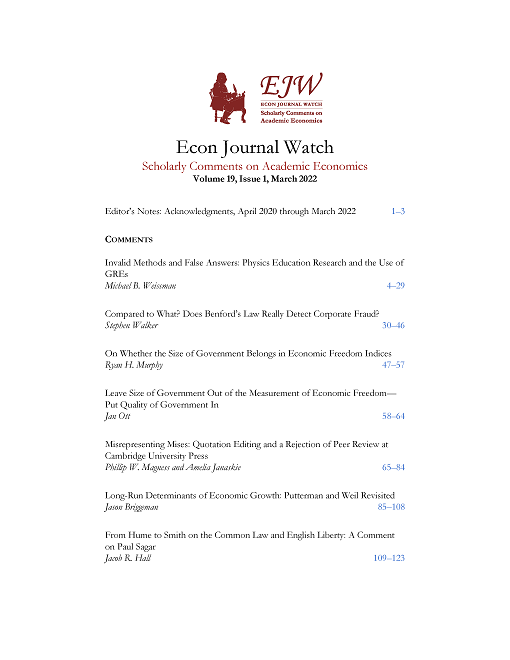