Two sessions held today in Washington at the annual meeting of the Southern Economic Association were devoted to author presentations of articles from the EJW symposium “Classical Liberalism in Econ, by Country.”

by Daniel B. Klein

Sean T. Stevens, in preparing a blog post for Heterodox Academy about the Langbert, Quain, and Klein article in EJW, scrutinized the article and caught a problem, and then kindly sent us a query about it.

Sean noticed that in footnote 5 (p. 424) we list University of Florida and University of Miami as among those universities that, though ranked high enough by U.S. News to be included in our investigation, were not included because they sit in states not covered by Aristotle (the database used for the study).

But Sean noticed that in footnote 4 (p. 423), listing the states not included in Aristotle, Florida is not listed. In fact, Florida is covered by Aristotle. In fact, those two Florida universities should have been included in our investigation.

To rectify the problem, we need to investigate the two universities that have been mistakenly left out of our analysis, which covered 40 universities. Although our subscription to Aristotle had expired, Aristotle has generously restored to us temporary access, to rectify the problem. We are proceeding now and will report back on the findings; look for a notice here at EJW News.

We are grateful to Sean for catching our error and bringing it to our attention!

UPDATE: We have made the corrections, publishing them in a brief article published in the January 2017 issue of EJW: “Faculty Voter Registration: Rectifying the Omission of Two Florida Universities.”

There aren’t many strong parallels to Econ Journal Watch in contiguous social sciences. People from such disciplines have often said they need an EJW in their discipline.

EJW has sometimes ventured into contiguous social sciences, as with its symposium on legal conceptions of property (link), an exchange in industrial ecology (link), and an exchange on sociological research on racial discrimination (link). In the September issue we feature an article on gender sociology’s neglect of scientific findings on sex differences (link).

EJW is open to articles from contiguous disciplines. One may read our section descriptions and think about applying the section concepts to other disciplines. On submitting work to EJW, see here.

On October 13, Econ Journal Watch editor Daniel Klein chaired a Mercatus Center panel discussion of the EJW symposium “Economists on the Welfare State and the Regulatory State: Why Don’t Any Argue in Favor of One and Against the Other?” The panelists were Donald Boudreaux, Scott Sumner, and Jeremy Rabkin. Watch below, or via YouTube.

Don Boudreaux has kindly posted online the text of his commentary. 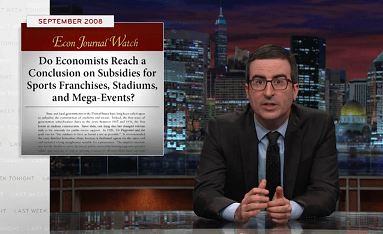 Research by Dennis Coates and Brad Humphreys published in the September 2008 issue of EJW was featured in a segment of the Home Box Office television program "Last Week Tonight with John Oliver" that criticized public subsidies for stadiums. The episode in question aired July 12, and the segment can be viewed for free online here.

We invite proposals for papers on the status of classical liberalism in the economics profession in a particular country, to be published as a symposium in a future issue of Econ Journal Watch. Tell us which country you propose to write about, how you would go about doing it, what you’d expect to say, and why you are qualified to write such a paper. Send communications/​proposals to the chief editor Daniel Klein at dklein@gmu.edu.

In proposing or undertaking such a submission, consider the following suggestions:

Authors should temper impulses to use the assignment unduly as an opportunity for in-group promotion or self-congratulation.

Submissions will be externally refereed by economists from the country, and not only by classical liberal economists. Submissions should be between 3000 and 10,000 words.

UPDATE: As of September 2018, eighteen articles have been published in the series. They are accessible here.

Below we shall maintain a list of countries for which we have received promising contact from individuals who are intending to write about the named country, or pondering doing so. But even if your country is listed below, do still contact us, as the plan for those countries is not necessarily set, and collaboration is possible:

We shall keep this listing current. If your country is not listed here, and has not been already covered, you can get first dibs. We welcome your contact!

Econ Journal Watch usually watches the economics profession, but in one future symposium we will ‘watch’ the government. We invite critiques of the propaganda of particular government agencies. The propaganda need not be expert government reports and the like; the focus may be on outreach propaganda such as government websites, pamphlets, speeches, educational videos, and so on.

We are looking for informed, scholarly, temperate criticism of claims made in government propaganda.

Publication of the symposium is tentatively scheduled for the January 2017 issue of EJW.

George Selgin has written a critique of Federal Reserve System propaganda. The paper appears in Cato Journal. Selgin’s piece serves as a nice example of what we are looking for.

If you are interested in developing and submitting such a piece, we encourage you to write to us to describe what you have in mind. Tell us the agency you will criticize and instance some false claims found in its propaganda. Tell us why you wish to undertake the piece, and about your scholarly or professional background in the policy issues and institutions involved.

Send communications/​proposals to the chief editor Daniel Klein at dklein@gmu.edu.

Econ Journal Watch is delighted to welcome Garett Jones as a new Co-Editor of the journal. Jones is an associate professor of economics at George Mason University (link to Jones’s homepage). His research has spanned monetary economics, economic growth, and experimental game theory. Jones greatly strengthens the EJW team by virtue of his all-around good sense and his high technical competence in economic analysis and empirical methods.

Jones currently serves in editorial capacities at the New Palgrave Dictionary of Economics and the Journal of Neuroscience, Psychology, and Economics, and he has been a guest blogger at EconLog. Having majored in history as an undergraduate, he often takes advantage of George Mason’s scholarly communities to learn economic history and the history of thought, and he contributes to those communities as co-host of the Adam Smith Reading Group. His email address is jonesgarett@​gmail.com, and his Twitter handle is @GarettJones.

In a new EJW Audio podcast, Frank Stephenson discusses the 2009 EJW article “Occupational Licensing: Scant Treatment in Labor Texts” that he co-authored with Erin Wendt. Here is a note from Stephenson describing positive changes that have taken place since publication of that article:

In a “new to this edition” summary of a revised version of their book, Hyclak, Johnes, and Thornton note that they have “[a]dded the topic of occupational licensing” and explain that “Occupational licensing requirements now affect more than twice as many workers as do unions in the U.S.; and recent work by Kleiner, Krueger, and others has analyzed the growth and impacts of licensing. Yet other labor economics textbooks devote little or no attention to this increasingly important topic.”

EJW means to stick to its focus on two things:

Neither of those, however, is the focus of the symposium on sovereign debt crisis. The symposium is a special exception. The reason for the exception was that the world needed discussion of tipping-point scenarios and crash dynamics, and the EJW platform was serviceable for this purpose.

Tyler Cowen and I agreed on the need. Then followed the EJW-Mercatus collaboration, of which EJW is honored and grateful.